What's up with bunker this year?

New Jersey fishermen who weren't following the changes to menhaden harvest regulations may be surprised the first time they go to buy bait this year. Statewide regulations on menhaden, also known as bunker, sharply reduce both the number of licensed commercial fishermen authorized to take the bait fish. With the total available menhaden harvest down and demand increasing as fishing season arrives, prices are reflecting the change. The wholesale price has already more than doubled since last season and retail prices are slowly climbing as fishing season gets started.

Commercial fishermen had to meet new state requirements before they could renew their net fishing license for 2014. Most smaller watermen did not meet the requirement so there are fewer net fishermen this year. Meanwhile, New Jersey marinas must now purchase a special license to sell bunker and must make periodic reports to the state. Marina accountant Tony Novak CPA estimates that the cost of the licenses and additional paperwork could add up to $.50 to the cost of each bait fish for smaller marinas.

The lowest retail price we've heard for fresh bait off-shore is $2.50 per fish. These fish were likely caught in a net and then transported in a basket to a buyer. These bait fish typical remain uncooled for a day or overnight. The decaying process is generally considered to adversely affect the use of the bait for striper fishing, but does not affect its use as crab bait.

The freshest bunker are removed from the net as live fish and then immediately placed on ice either on the boat or dockside within an hour or two. These fish will likely sell for $3 to $4 at the marinas that serve as the commercial ports for bunker harvest. To be sure your bait will be fresh when you need it, always call ahead with your order. Money Island Marina does not take "reservations" for bait but does accept advance purchase orders by telephone, text or email but a credit card may be required for first-time customers where credit and payment reputation is not established. 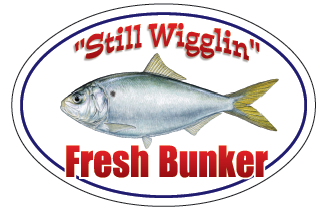 Money Island Marina is testing new fish storage system that uses a type of high density plastic that is designed to slow the oxidation process of the contents. It is the same food storage system used by many restaurants to store foods and sauces at peak conditions for up to 10 days under refrigeration. We expect to have results of the test soon.

Recreational fishermen may consider buying bait directly from a commercial fishermen and watermen report that recreational boats occasionally approach them on the water or at the dock. This is a bad idea because the marinas prohibit direct sales by the commercial waterman as part of their dock rental and bunker purchase agreement. Money Island Marina, for example, would immediately terminate the slip rental and evict any watermen on evidence of a direct sale. The watermen may be tempted to accommodate a boater who asks for a favor and certainly they appreciate a sale of a few extra dollars. But he risks the seriously disruptive prospect of losing his dock for the offense. Marina managers tend to be a closely connected crowd so a waterman with a tainted reputation would likely have trouble finding an alternate port. With the increased electronic surveillance of the areas of fisheries plus increased communications by fishermen on social media, the chance of the watermen being caught for this offense are greater than ever. So please don't put our commercial watermen in this difficult position of asking them to sell bunker directly.

Marinas and waterways are inherently dangerous. Exercise caution and always keep safety as your first priority. Enjoy our facilities at your own risk.

Money Island Marina LLC is pleased to host projects of BaySave Foundation promoting sustainability of the Delaware Bay communities and the living shoreline projects of The Nature Conservancy and the Partnership for the Delaware Estuary. The marina uses Green-e Energy to certify that its energy program meets the minimum environmental and consumer protection standards established by the non-profit Center for Resource Solutions.